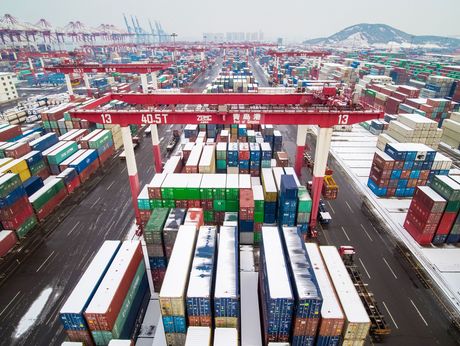 Early Monday the New Zealand Dollar was boosted by better than expected Services PMI numbers for July with figures showing an improvement of 54.7 with the June Index also being revised up to 53.0 from 52.7. The kiwi will need more positive data to improve the overall mood. It seems to have consolidated just above the 0.6400 mark against the big dollar which is surprising given the recent shift in policy by the RBNZ when they cut the cash rate from 1.5% to 1.0%. On the whole the NZD had a poor week across the main currencies only rising against the Euro and Japanese Yen as risk fears eased slightly. Focus will be on the Jackson Hole meeting in Wyoming by central bankers with Powell set to speak for the first time since recession fears spooked markets last week. We expect the kiwi to remain heavy into Friday. NZ Retail Sales prints Friday.

Re-election chances will be on Trump’s mind as the months roll on in the trade war between China and the US. The likelihood the US economy drifting into recession is reasonably good if things continue. The good news is the President has delayed increasing tariffs of 10% on 300B worth of Chinese products until December 15. Secretary Mnuchin and trade representative Lighthizer viewed the additional tariff a step to far and counter productive. Equities and commodity markets all breathed a sigh of relief and were boosted on the news.
Future US monetary policy may be revealed this week, with all eyes focused on the Jackson Hole annual meeting in Wyoming with Powell speaking for the first time since word got out of a possible recession. With a 0.25% cut mostly prices into markets already for September it’s unclear how low rates could go with prospects the Fed could start QE again. Trump says the Fed raised rates to high late in 2018, the reason why the economy is slowing. US 10 year and two year yields are trading below 2% currently – the first time since 2007 showing worrying signs of a teetering economy. Trump confirmed over the weekend he was interested in buying Greenland for strategic reasons – this has gone down as a bit of a joke with the govt of Denmark insisting it’s not for sale saying the idea was “absurd”. No significant data on the docket this week.

The Euro had a disappointing finish to the week, closing 1.15% down against the greenback. The Euro has remained under pressure amid increasing pressure the ECB are soon to announce a fairly large stimulus package. A contraction in German second quarter GDP had investors ditching the EUR after printing at -0.1%, but the economy grew by 0.4% compared to the same quarter in 2018. The figures follow an upside surprise of 0.4% in the first quarter of 2019 showing the economy is still growing over the first half of the year – just. These weak figures could suggest we may see a contraction in the third quarter print which would put Germany in a formal recession. Merkel and Scholz are set to run a deficit if Germany goes into recession.  French and German Manufacturing figures will publish Thursday and could reflect the recent GDP figures lower.

The British Pound outperformed its peers last week after being aided by a rise in July retail figures which has encouraged hopes of a third quarter economic UK recovery. Retail Sales rose by 0.2% for July after markets had predicted a 0.3% decline. Department store gains led the way in the increase to the three months to July of 0.7%. Brexit is likely to be delayed way beyond the 31st October deadline bringing a sign of relief from investors and the Pound. Corbyn plans to call a no confidence vote in the hope of defeating a “no deal” outcome. If he wins this will delay the 31 October exit from the EU when he will call for a snap election and campaign for another referendum. UK’s prime minister Johnson meets with French president macron and German Chancellor Merkel in Berlin this week – we await further details. Apart from the Jackson Hole Symposium starting Thursday in Wyoming the Pound has no other economic data printing. We think any further lifts in the GBP could be met with stern resistance over the next week or two with bearish momentum expected to resume.

Japanese Exports have reported an eight straight month of declines to July on Monday as mainly chip making machines and vehicle parts led the way reflecting a slowdown in China. Exports fell 1.6% from a month at the same time last year the Ministry of Finance reported.
Japan’s trade deficit in July was 249B Yen compared to 589B Yen the previous month. Monday’s Tanken Japanese Manufacturing Index released at -4 in August versus 3 for July and is the worst reading in over six years since April 2013. Concerns over global growth along with China’s economy weakening the main catalysts. No further economic data is due this week – no doubt the Bank of Japan will have a representative at this week’s Symposium for central bankers later in the week.

Headline Canadian inflation is due this week with expectations of 1.8% from the 2.0 y/y, while the monthly figure is due at 0.1% from -0.2% m/m. With global markets on edge by the US/China trade situation investors have started to consider prospects that the Bank of Canada will ease sooner rather than later. Even if Canadian CPI pivots around the BoC medium term target of 2.0%. The Bank of Canada September meeting looks to hold market consensus of a 30% chance of a rate cut, but a much higher probability at 70% an October cut will eventuate. Crude Oil holds steady in the mid 50’s for now with OPEC turning their view bearish for the rest of 2019 as production forecasts decrease. OPEC also said global supply could outpace demand by 1.97% affecting price. Retail Sales releases at the end of the week around the time the Jackson Hols Symposium kicks off.